Champion changes and updates that came with 12.17:

Ahri has been dominating and charming her way through the solo and competitive scene recently and boosting her stats up. Changes made this time around are not impacting her late game as the duration of the charm is the same on max level. But it will lower her kill potential early on, so she wont be as dominant as she was so far making her charm one hit kill spell. 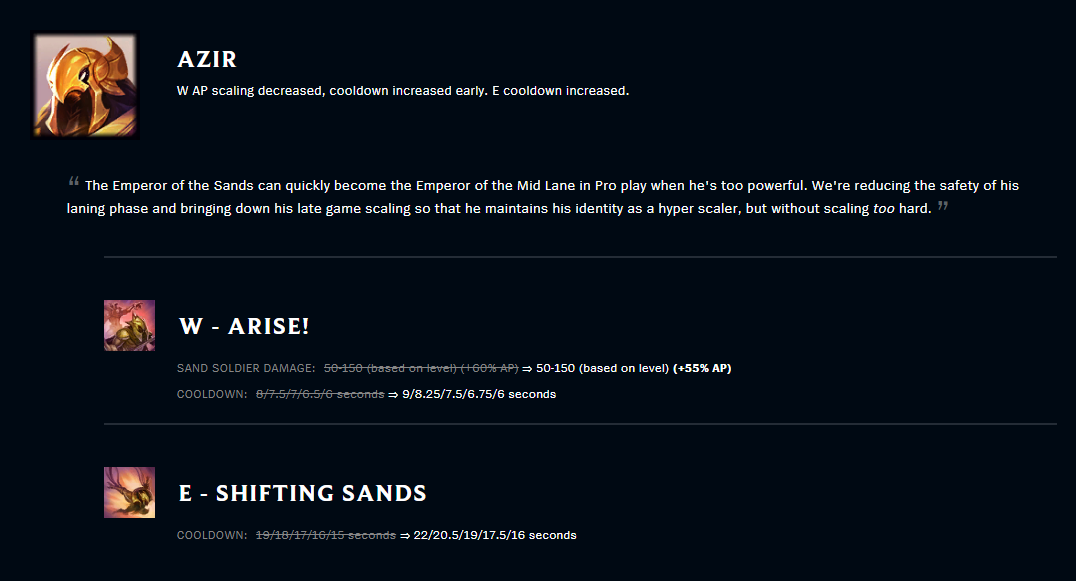 Azir had been dominating mid lane prior to 12.17 in more than one way boosting his stats a lot in competitive and high solo/duo ELO  so RIOT decided to nerf him down a bit as he was a bit overpowered. Riot is trying to even the playing field by making his escape potential early on a bit weaker than it was and making his late game scaling a bit lower overall. It is not fun getting one shot by sand soldiers from miles away without being able to do anything about it.

Camille has fallen off from competitive and solo queue radar so trying to hook her way back into the spotlight she got some buffs. Her E engage spell got a nice damage buff so that she can make a bit bigger impact with it. And her passive shield was raised so that she can do what she does best and brawl it out with other champions especially early on when she is at her weakest.

Ezreal has not been seen that much as he used to in competitive and in solo/duo as he was in the past.
Just due to the fact that he does not bring as much as many other adc champions right now.
Riot is trying to give him some more mobility and get him back into the game with buff that they are giving him. 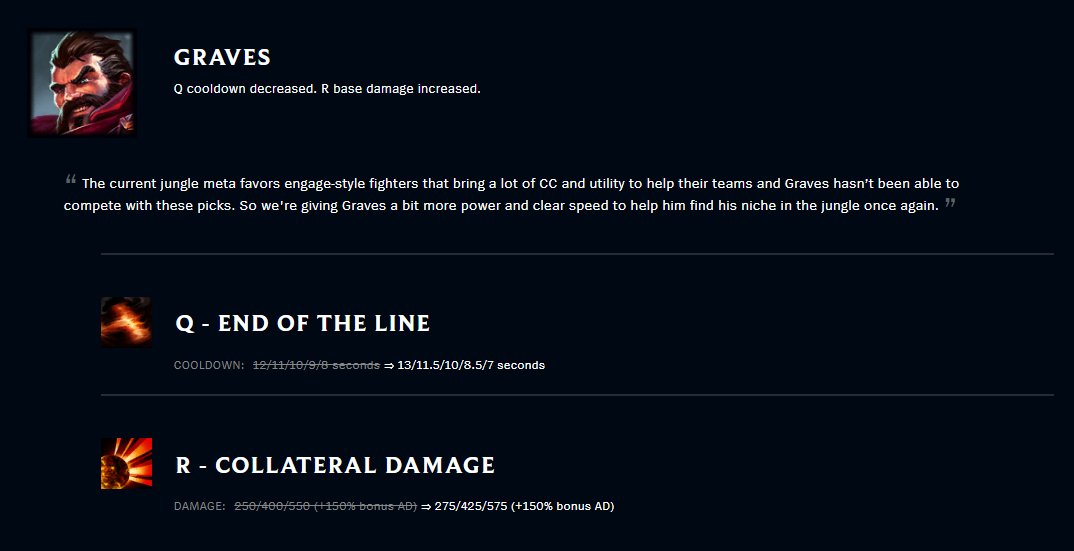 Graves still havent got his cigar but he is getting a nice buffs for his Q and R. While his Q will have longer cooldown at the start of the game once he levels it up 3 times it will even out and from level 4 and 5 it will have a lower cooldown than it was before. His R is just getting a damage buff that will help him have a higher kill potential early on. 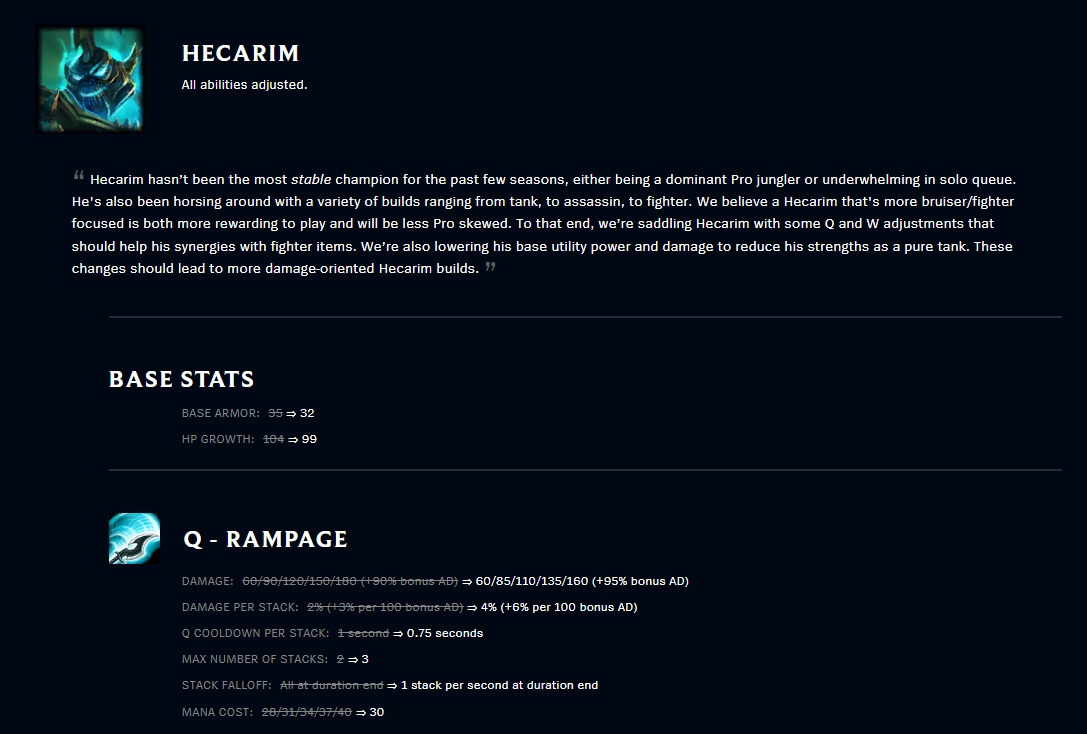 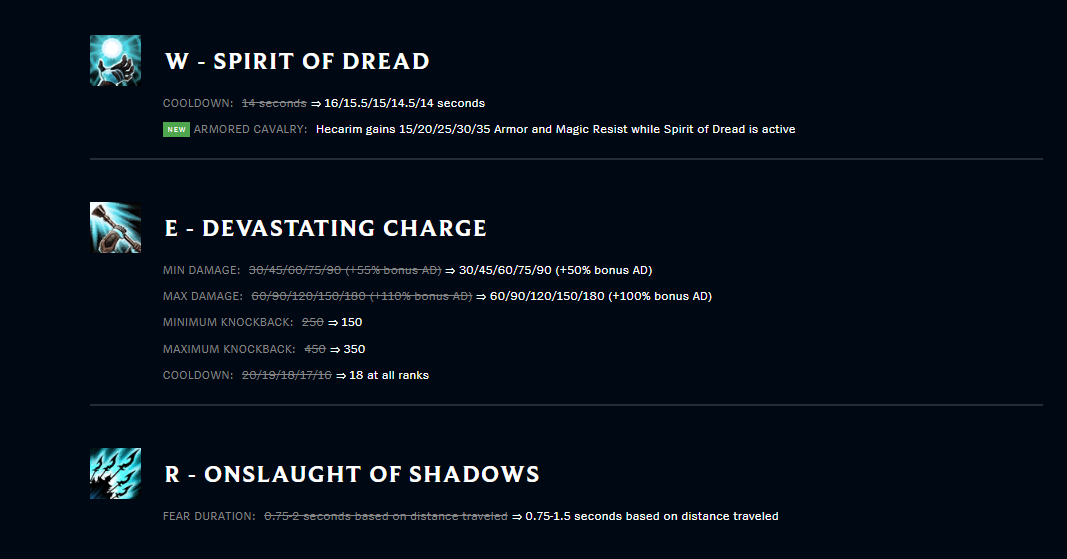 Hecarim just got a huge overhaul that might put him back up on the horse in the competitive and solo/duo queue. Early on he won't be as strong as he was due to removal of healing from his W and some other twikings his late game will be on another level. Depending on the enemy team and overall itemisation he will be force to recon with as he will dash out a huge amount of damage and crowd control.

Kassadin is an extremely strong champion as long as he has the time to scale up, farm some items and get to level 16. But early on he is not as strong as some other mid laners with limited mana and amount that spell costs to be used. So RIOT is lowering his Q cool down as well as mana requirement. With this he should have an easier time to actually scale faster and get to a point where he can dominate the map. 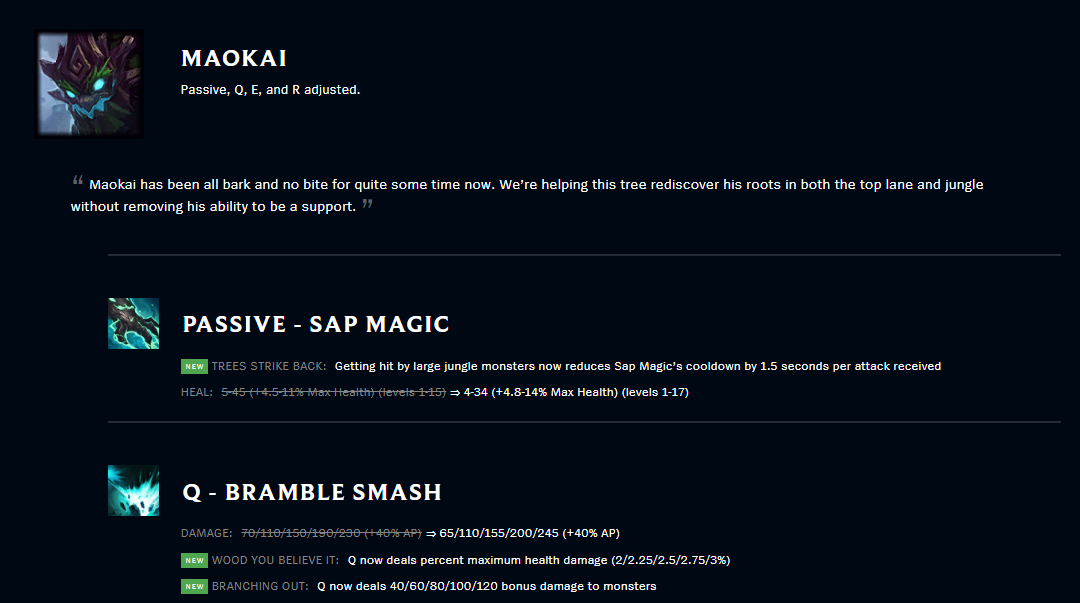 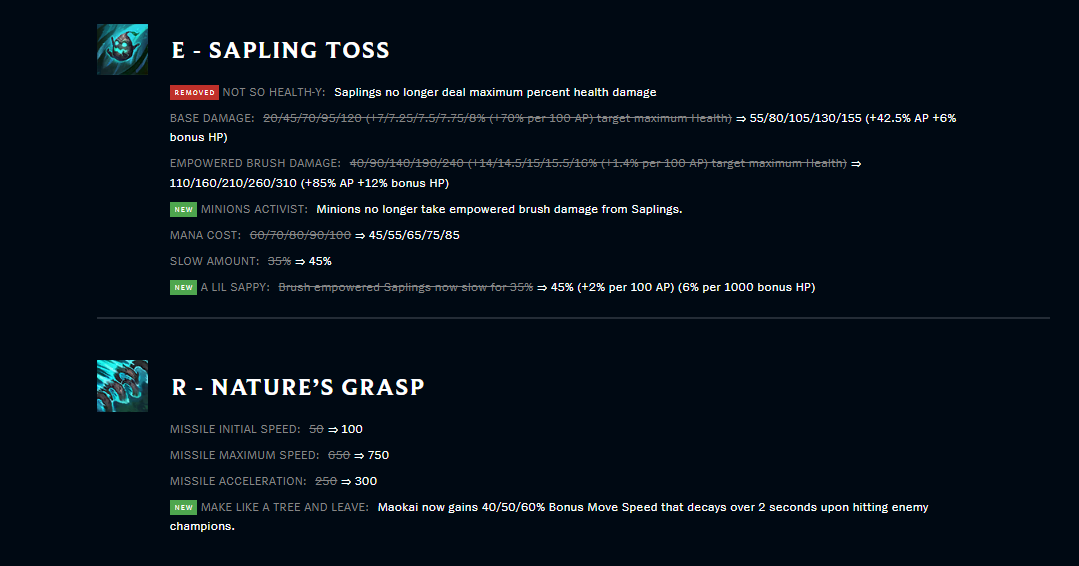 As Maokai was nowhere to be seen for quite some time he is a second champion that got a huge overhaul so we might be seeing him a lot more on top lane and in the jungle from here on out. The changes that he got will most likely boost his overall playtime on competitive and solo/duo queue. On top of getting a huge overhaul most of his spells including passive got nice buffs that will make him more fun to play while giving him a kit he needs to have a big impact on the game early and later on. 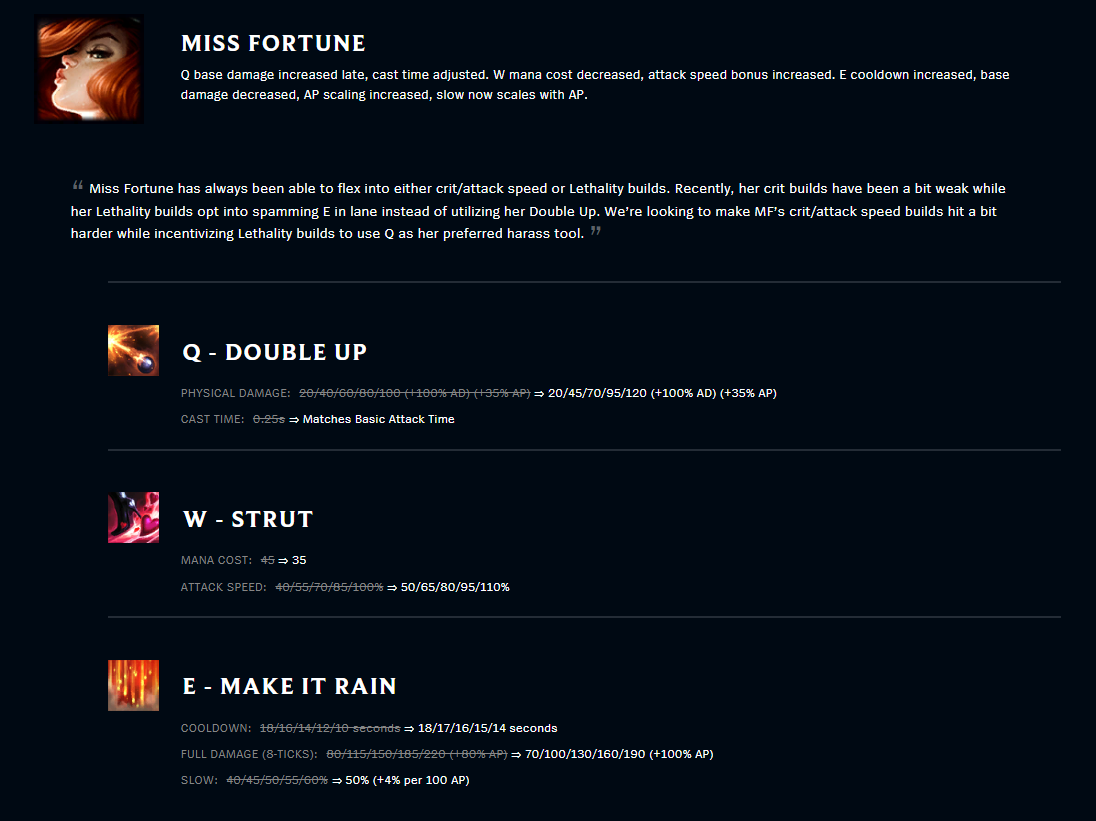 Miss Fortune got some really nice boost this time around. As she is used as ADC and SUPPORT depending on the game her W will give her a higher carry potential late game with higher attack speed, while her E will provide a huge slow and damage overall early, mid and later game thanks to the scaling from AP. With this we might actually see Miss Fortune being picked a lot more on the support role right now.

Nami has been seeing a lot in solo/duo que especially with combinations such as Lucian for a simple reason that her E interaction was overpowered and was giving such a huge boost to their kill potential. She would have electrocute procs as long as the ADC that was next to her got 2-3 fast attacks into the enemy champion without her having to do much else than cast E on allied champion. Because of this RIOT decided to nerf this interaction and make her E that has 3 stacks count as singular spell instead 3 separate ones.

While the Nocturne was not picked that much in recent patches, buffs that he is getting might change that a bit. Even if the buffs seem minor they will actually give him a lot faster clear time within the jungle and boost his overall performance. With this he will have an easier time reaching his needed level 6 when he can just start to be a nightmare for the enemy team every minute by covering the map in darkness and jumping from afar to help and kill the enemy team. 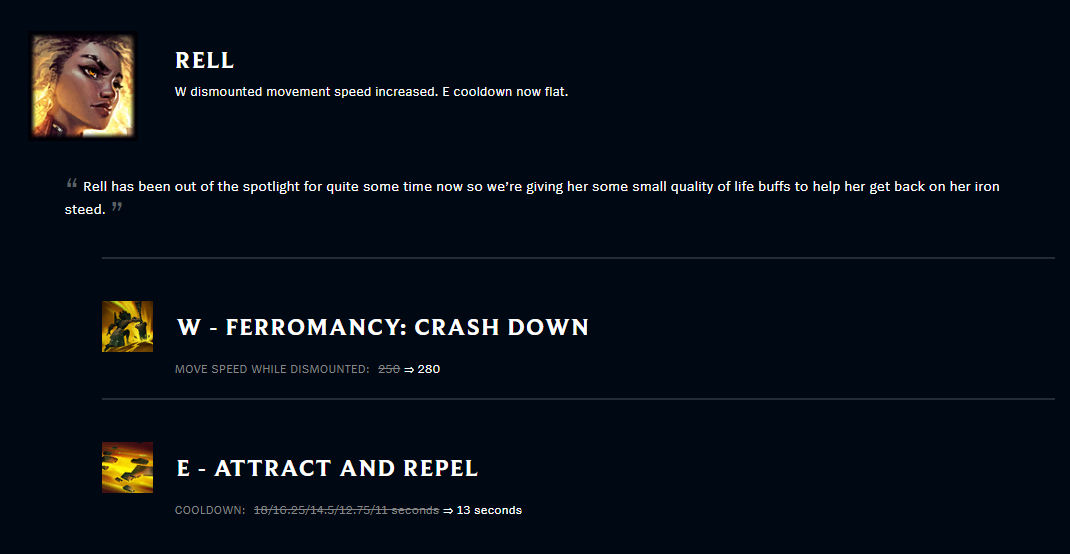 Rell was nowhere to be seen as support for quite a long time now as she did not have the impact that she used to previously. Due to this she is getting some buffs to try and get her back on her horse so she can see some more time in game. Her E that was giving her a nice amount of CC got a huge cooldown reduction early on and is now flat 13 seconds. While her move speed without her horse was extremely slow, RIOT decided to buff it up and allow her to actually move when she dismount from her steed.

Renekton was a big brawler that could even be picked blindly into top lane and he would easily dominate almost any melee and range match ups while just making semi tank and semi damage items. Because of this RIOT decided to lower his flat damage on Q and boost his AD ratio at the same time. This way he will have less kill potential early on but would have higher damage and kill potential later on in the game. As long as you build that rage up and hit Q it will do a pretty nice chunk of damage. 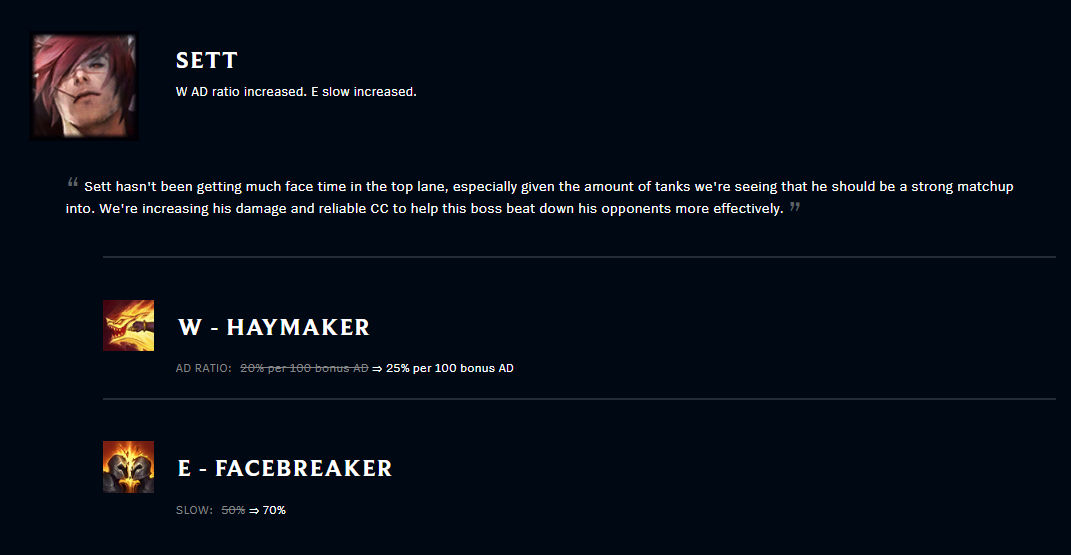 Sett was not picked that much in recent times so he is getting some nice boost and buffs over all. His W will scale better than it used to, so having brawls and hitting it once your energy fills up will dash out a really nice amount of damage. His E is also getting buffed and will have a lot stronger slow so it will help with 1v1 fights where you do not have a 2nd target that will let you stun your opponents. This might not get him as much play time as he wants but it sure will help. 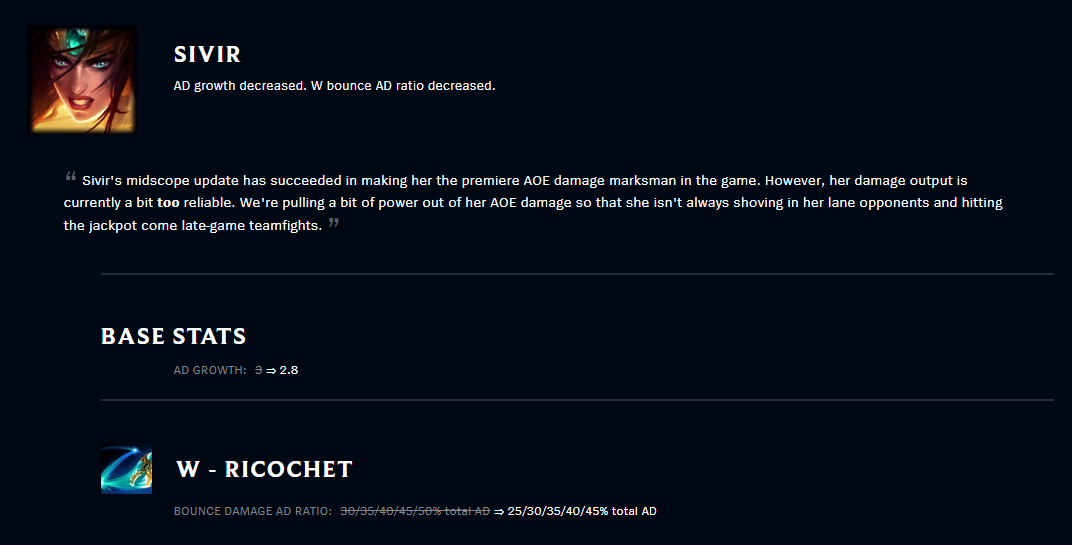 Sivir was just boosted way too much since 12.15 and she is getting her 2nd nerf right now. Due to her scaling she would just hit a point where she would delete the enemy team with a couple of auto attacks and aoe damage that she was outputting, not to say that she has extremely good wave clear potential early on as well. So RIOT is trying to ground her a bit and not let her just hit a point where she can do whatever she wishes. 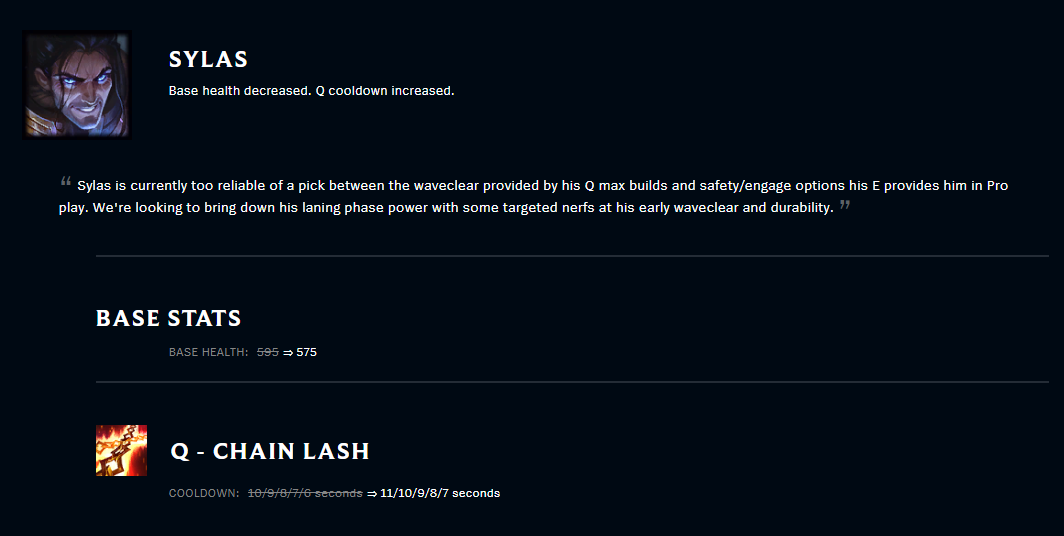 Sylas was just one of the best mid picks out there recently. His overall clear potential for waves, kill potential and brawl potential was just really high. Because of this he is going to lose some starting hp that was giving him a leeway in trading early on, and his Q will have a longer cool down so that he can’t just delete an upcoming wave of minions without any trouble whatsoever. This wont stop him from being picked but it will lower his early game ability to be all rounder too early into the game.

Taric was really shining in recent times as he was an allrounder support who could easily stun, heal and tank at the same time. Because of his high magic resistance and pretty low over all E- stun ability due to his passive he could easily brawl with even range casters. Due to this his magic resistance is going down as well as his E cool down is going up. With those changes he won't be out from the game completely but it will lower his overall early lane stage ability to just dominate.

Trundle is one of the kings of the jungle right now. On top of having a really fast jungle clear he is also a big brawler who can easily kill or set up kills on lanes. So this nerf is an attempt to slow down his jungle clear while still letting him keep his spot as the king of trolls and jungle. His W that is getting a pretty big addition on the cooldown timer, so with this he shouldn’t be able to be as fast and as strong as he used to. But this does not mean whatsoever that he will not be a king of trolls. 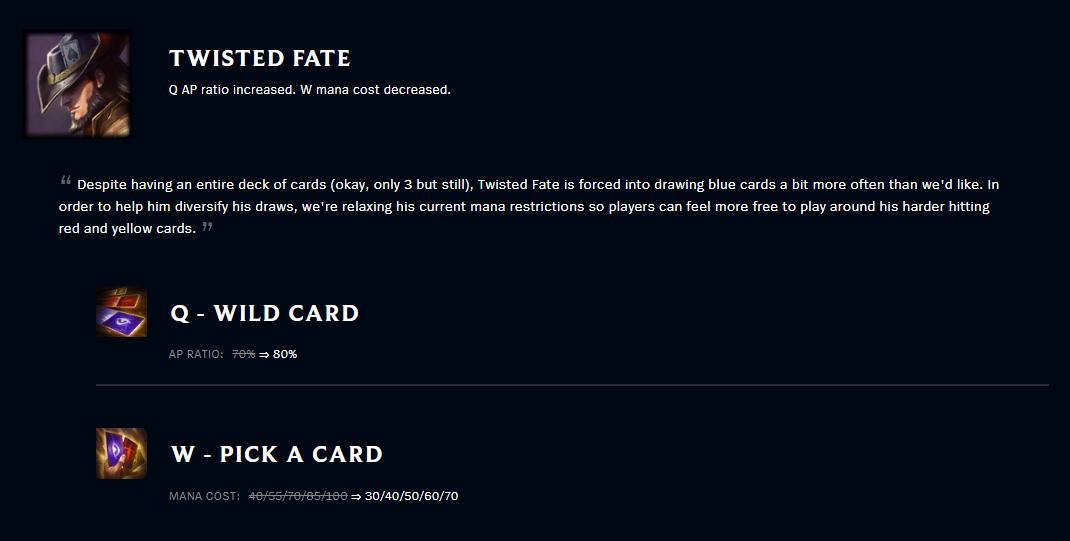 Twisted fate was just restricted with his choices when it comes to picking up a card he would have to use early on. Due to limited mana pool he would have to get a blue card and get his mana back instead of being able to go for red or yellow so that he can deal out some nice damage to enemy champions. Duo to this the amount of mana required for his W was lowered and at the same time his Q ability power ratio of scaling has gone up.

Wukong has been king of the jungle for quite a long time now and is exceptionally well, be it early, mid or late game. There were just a couple of champions that could compete with him, be it how fast they clear jungle camps or setting up kills and putting pressure on lanes. Due to this RIOT is hitting breaks on his base move speed and his base attack speed. While he will still be one of most picked heroes out there this will give other junglers room to breathe and shine.

The changes that came with 12.17 have been small and big for some champions, so in case you love some champions like Hecarim or Maokai now is a good time to boost your win rate with them. As they have gotten a huge overhaul that should put them back on the map to get som easy wins.