While Ashe did find her spot as a support she was just not having a fun time being ADC for quite some time now, because of that her Q is getting a really nice and big buff that might put her back up in sight and return her to her former glory as ADC and not a Support champion. This buff should boost her overall performance in solo/duo and in pro play. 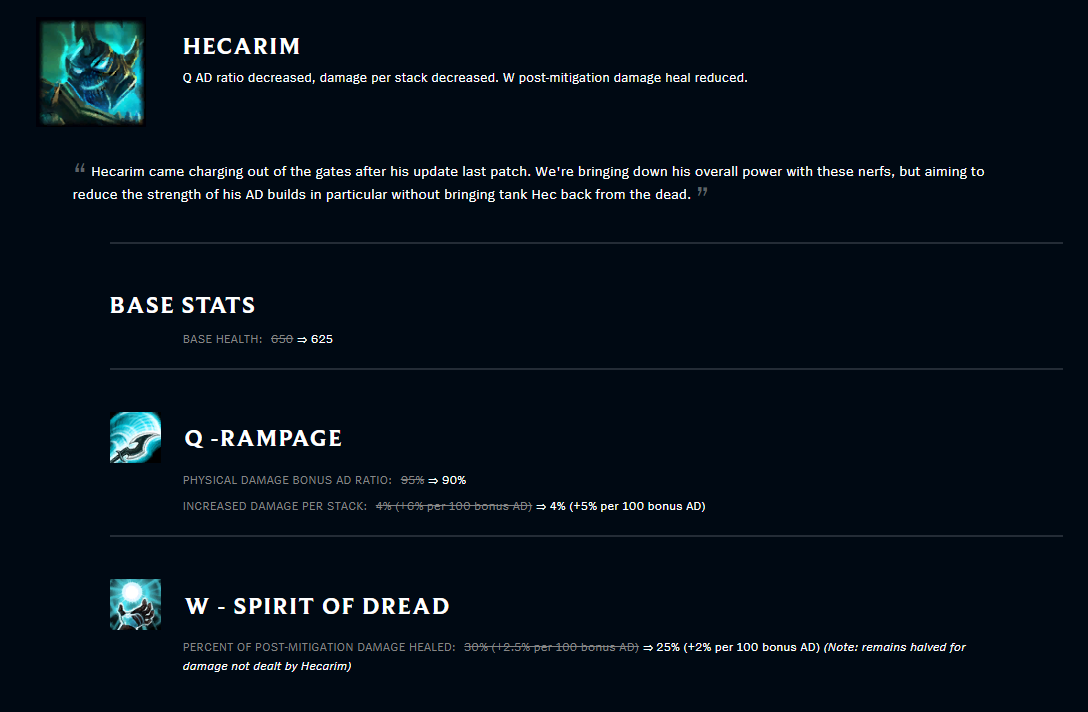 Hecarim was having a time of his life raiding around the summoner's rift map after his big overhaul. He was one of best and easiest champions to boost your mmr and divisions with but this nerf will probably put him back in his place. His Q dmg is getting a nerf as well as his W that was just way too strong in the mid/late game.

Kalista was just way too cheeky in the early lane phase, while easily trading blows with enemy ADC and Support she would be hard to punish due to her high starting HP, with this RIOT is trying to make sure she just can't do as she pleases early on in the game.

Kayn Darkin or red form as people call it have just been up on the rise since durability path came out. Due to natural high damage and insane amount of healing red kayn form was picked in over 90% of the matches, while his blue half was nowhere to be seen. Because of that his Q is getting a nerf as he was just an unstoppable and unkillable machine recently. 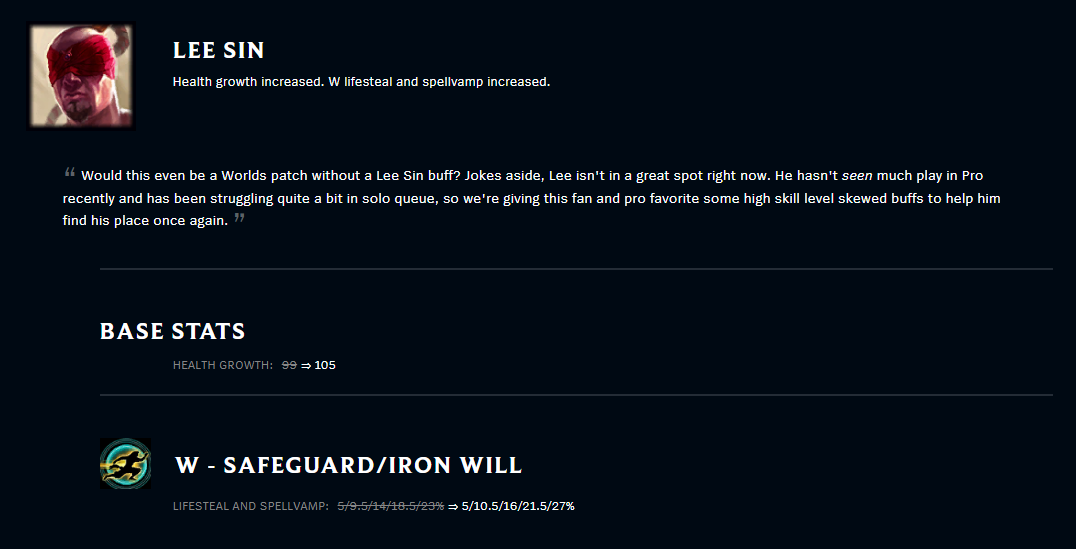 We haven't seen Lee Sin in pro as well as in solo/duo play for quite some times now. It just didn't feel like he has a kit that is needed to actually be playable and viable right now. For that simple reason he is getting a nice buff for his HP growth as well as his W life steal %. We hope that this will bring him back and we can see some insane Lee Sin plays during Worlds.

Lulu was just way too overpowered recently, and with the kit she had she had boosted play time on the pro scene as well as in solo/duo queue. And because of that she is getting a pretty significant nerf on her W. Move speed bonus for her allies got nerfed, as well as the disable duration on enemy champions and lastly cooldown. With this we hope that little pixy won't be as out of control as she was recently. 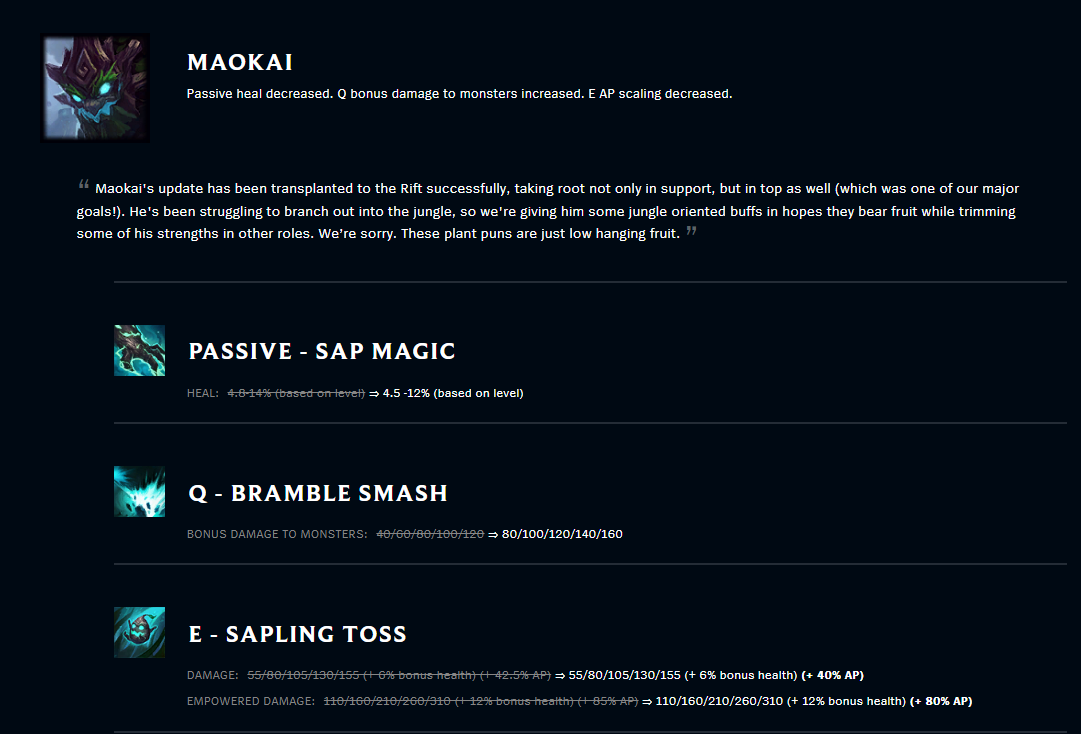 Maokai was just dominating Support and Top lanes since the last rework that he got. He got such a huge boost that it was sometimes impossible to play against him. And because of that he is getting grounded down a bit with the 12.18 patch. His overall healing abilities as well as his damage is getting nerfed. This is an attempt to see him more in Jungle over other two roles.

Miss Fortune was really cheeky since the last buff she got, she would get to a point where she could just one or two tap enemy champions. Because of that she is getting a decent nerf on her attack damage growth, as well as her health growth per level. We will see if this will be enough for her to not be as cheeky as she was during recent times.

Nocturne was a really scary jungler to go against it after recent buffs, while having a huge base damage as well as damage growth per level he also has a kit that he can use to easily dominate jungle as well as gank lanes and set up kills for his team. Due to that RIOT is nerfing his attack damage growth per level. He will still be a scary opponent to face but not as much as he was. 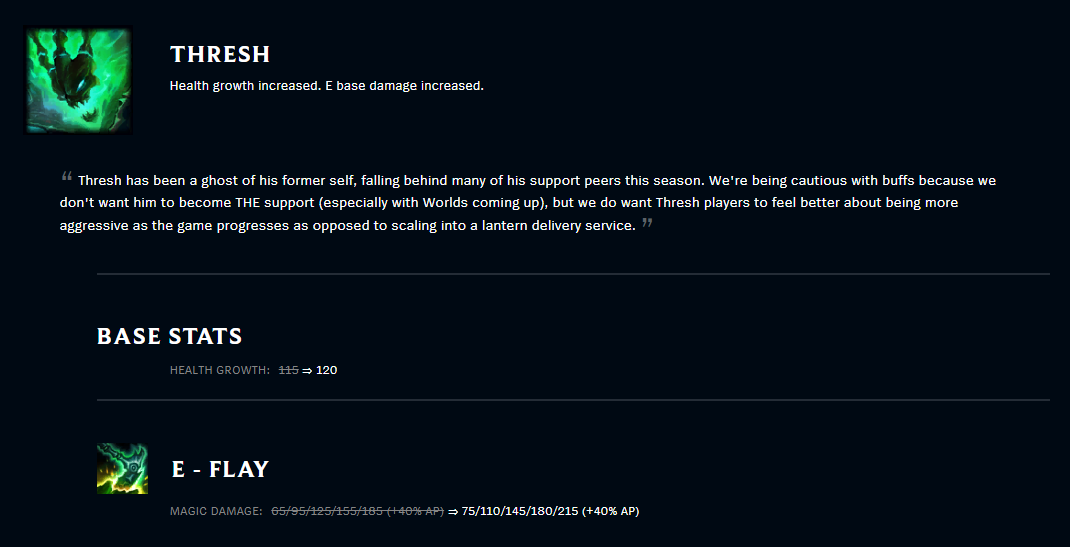 Thresh just was not in the spotlight at all as of lately. Even though his skills and kit can be really powerful tools it just felt like he wasn't giving out as much as some other supports. Because of that he is getting some nice and needed buffs to try and give him some more playtime in solo/duo as well as pro play. He is getting a health growth buff as well as some damage buff for his E. 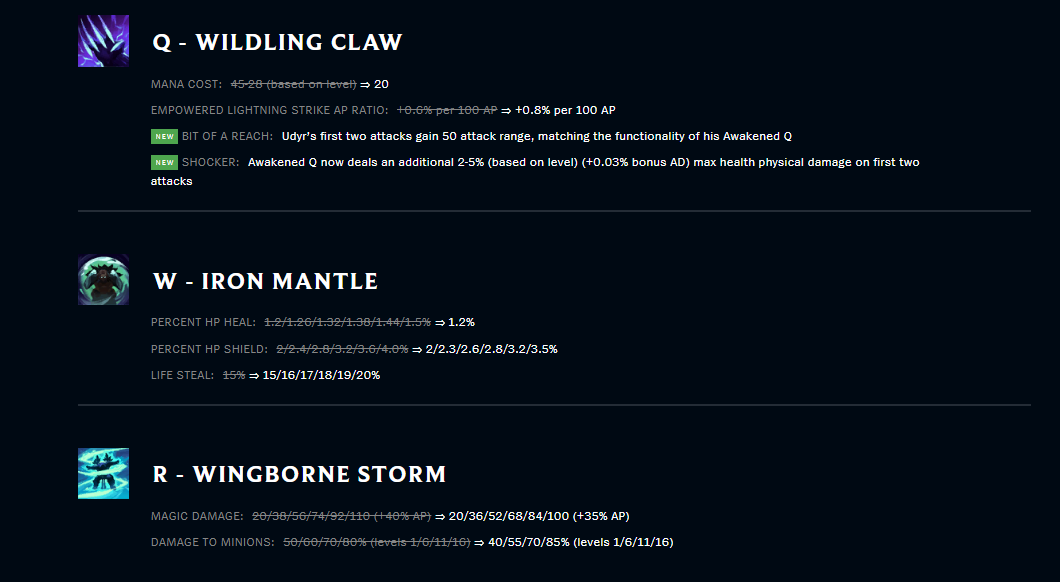 Udyr has been on the rise since the rework that he has gotten. He was a huge truck that would stomp most of enemy champions down easily on top lane and in the jungle while being unable to die. Because of that he is getting some adjustments and some nerfs for certain spells. His Q got buffed a bit, while W got nerfed in some aspects such as percentage healing and shield while life steal got buffed. And his R got nerfed as it was really overpowered. While changes will impact him we think that he will still be one of most played top/jungle champions.

Patch 12.18 will bring some balancing for champions that were way overpowered, and at the same time boost some of champions that we didn’t see for quite some time in solo/duo and on the pro scene. And we hope that we will have an exciting world’s championship in League of Legends this year, same as the last one.