Hello everyone, one of the last patches of the 12th season has been released and we bring you everything you need to know!

Here are the patch highlights and as we can see for the end of the season many champions got buffed and only Master Yi and Rek’Sai seemed to deserve a nerf this time. 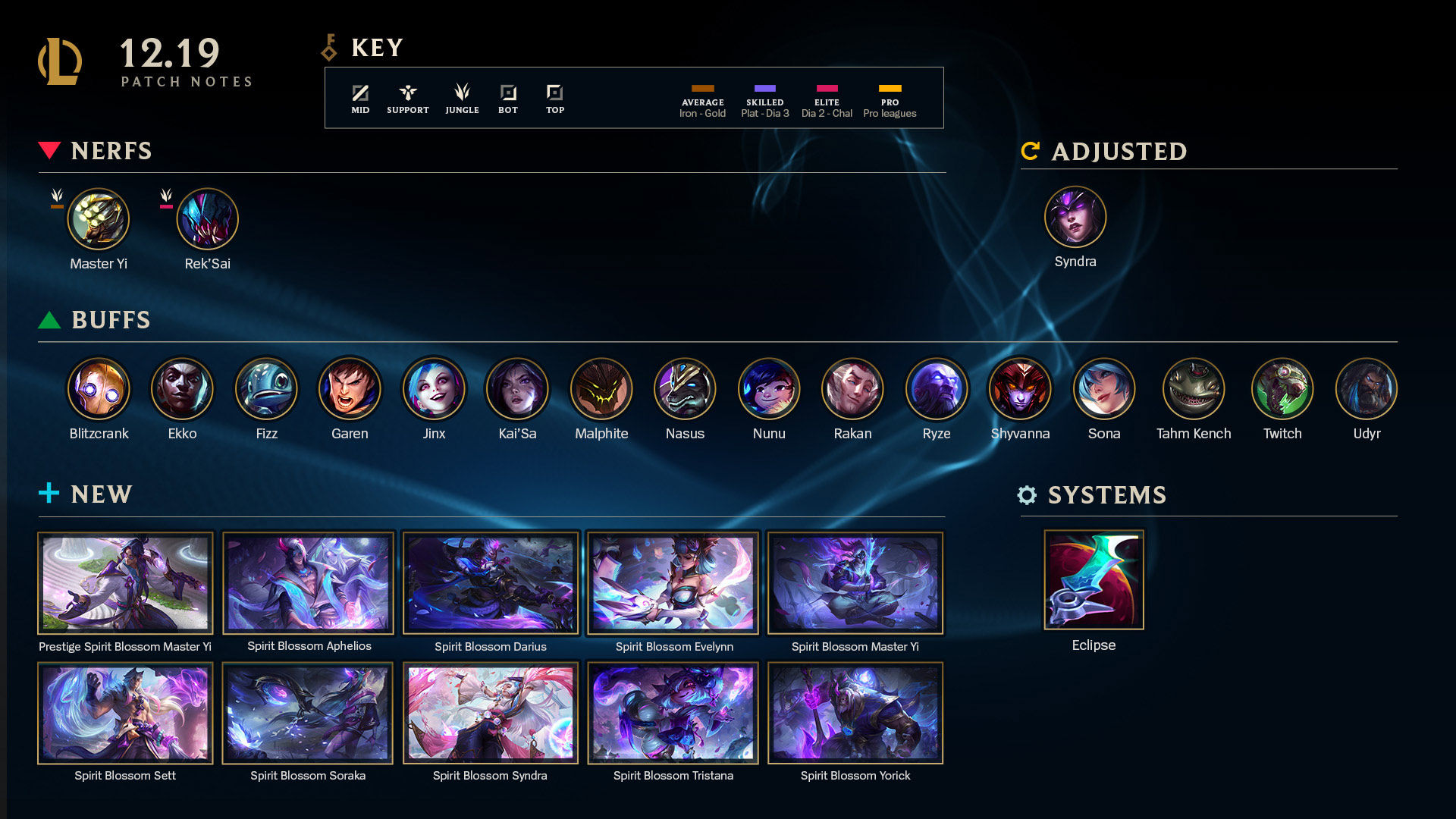 The most anticipated update was most definitely the Syndra adjustment so let’s start with this.

As the guys from Riot say, Syndra has been in an awkward position for quite some time. Since she used to be an iconic mid lane champion, they wanted to bring her back to this competitive mid lane playground. Let’s see what the changes are. 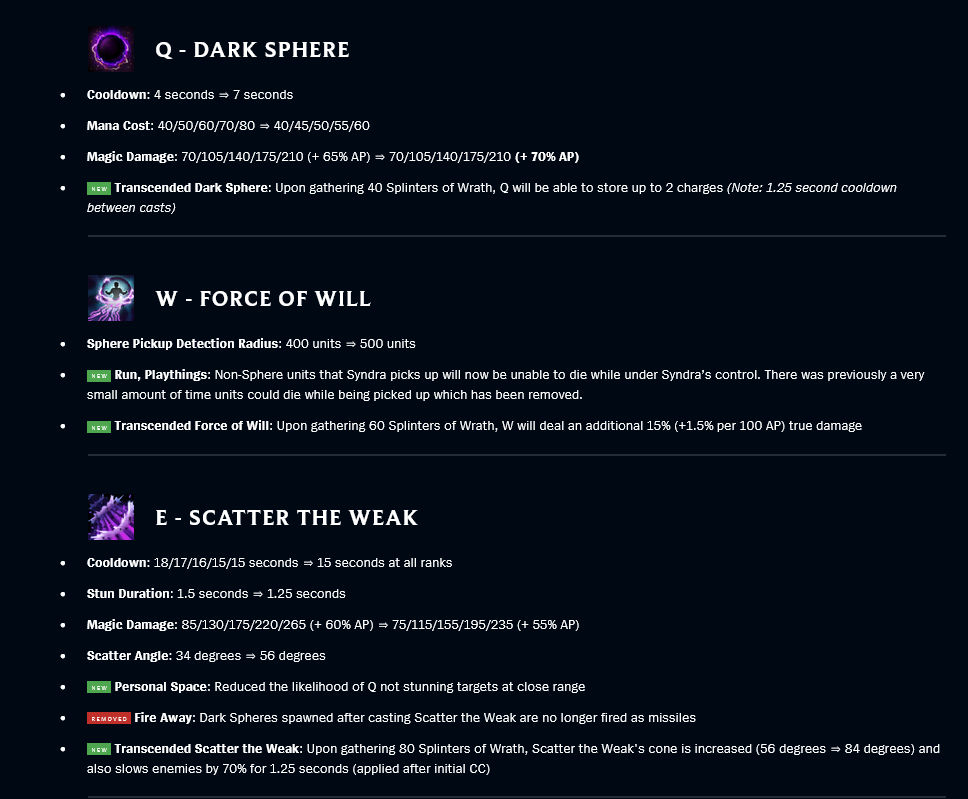 Blitzcrank got his base stats improved. His W and E now cost more mana, but he got a significant bonus attack speed buff. The konck up duration of his Power fist is also increased and deals more damage. Regarding his ultimate, it will deal notable more damage. Some say these changes will allow Blitzcrank to fill more roles than just a support one that he's been for years. With these updates, Blitzcrank could be a very effective jungler. Looks like he won't be annoying to just ad carry mains now. What do you think? Will players accept these changes and apply them succesfuly or will your jungle Blitz come to gank your lane, miss his hook and smite your cannon? 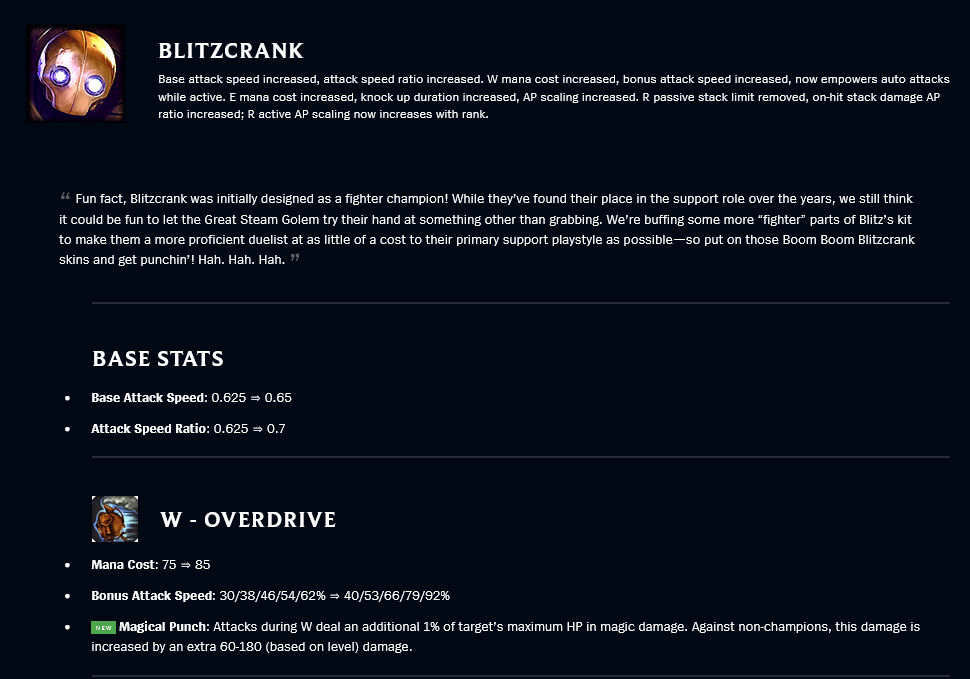 Ekko was maybe not so far behind as other champions that got buffed this patch. His pick, win and ban rates were decent, but Riot decided to improve his damage just a bit to bring him back to a spot where he will be considered in almost every matchup. His “Third Proc Damage” Ap ratio is increased for 10% while his ultimate’s ap ratio got a significant buff from +150% to +175% 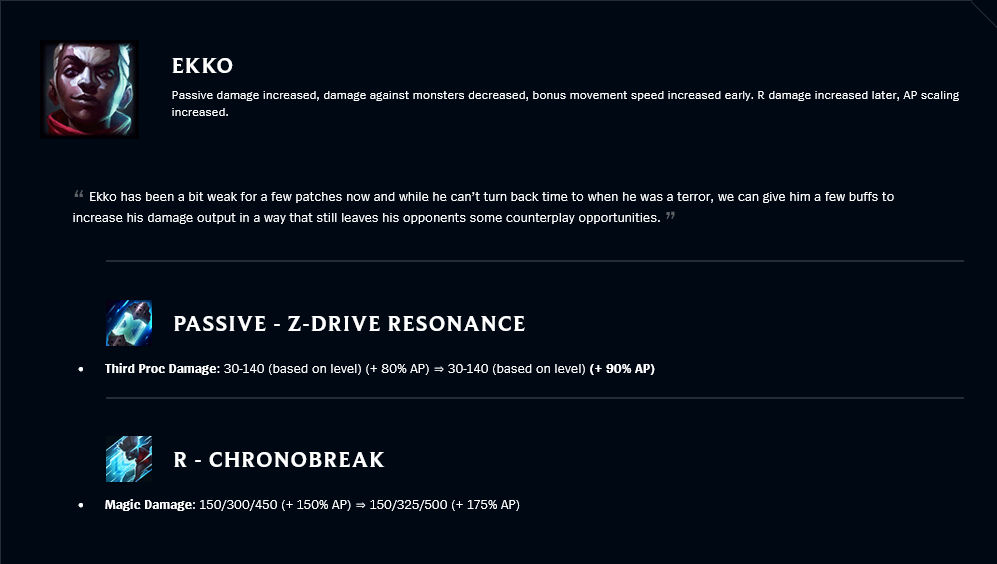 Few patches ago, Fizz recieved very nice VFX updates, so it seemed logical to give Fizz a little buff to ecourage players pick him more often. Since Fizz's scale capability was not the best if he didn't get an early lead, His E - Playful/Trickster - AP ratio was increased to 90% instead of 75% to compensate that. We are sure Fizz lovers are delighted with these updates. Fizz has always been a fun champion to play and in the same time not so fun to play against if he gets an early lead. This buff will surely help to improve his winrate.

Critical strike damage of Garen's E increased. This will lead to more players playing crit Garen, but it doesn't affect the whole gameplay that much. Going for  Stridebreaker followed by Mortal Reminder is still the best build for Garen since you the directly benefit from buffed cirital strike damage with this build.

Sadly, Jinx has not been a good pick for a long time. That's why Riot decided to boost her Base attack damage as well as the damage to the primary target of her ultimate. The Arcane movie did boost the popularity of Jinx, but it was not followed by her kit and fit in the all around meta we are seeing lately. Hopefully, this buff will increase her pick rate and win rate as well. We look forward to seeing more clips of Jinx stealing the baron and dragons, as well as sniping enemies across the map! 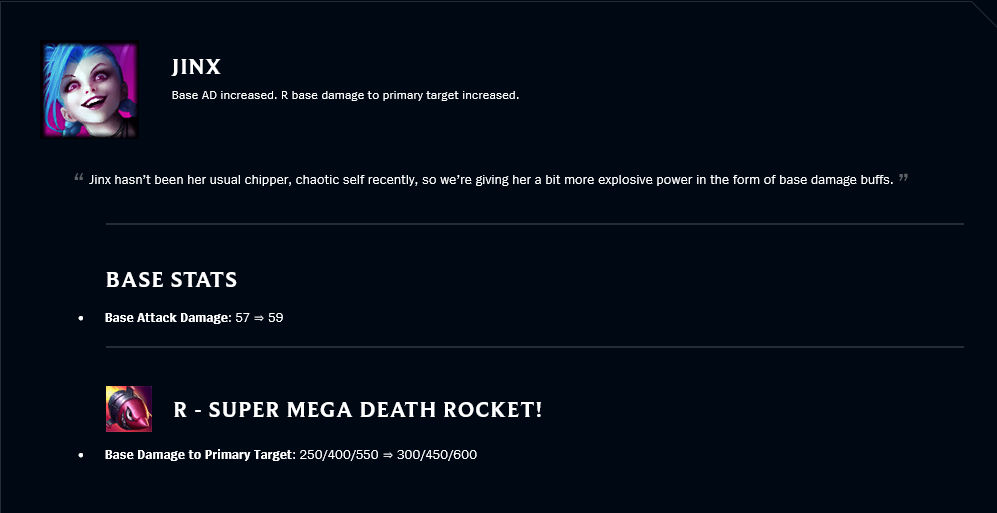 Kai'sa has been a top tier marksman for a while now. Her kit is very strong, and she has excellente scale capability. Kai'sa is one of the few marskmans that can effectively mix and adapt builds for any tipe of matchup, and that's the reason why many players, as well as boosters abuse her. Although her capability to adapt is great, her AP side has been more or less ingored since her nerfs a few patches ago. Regarding that, Riot will boost her passive AP ratio a bit.

AP Malphite lovers this one's for you! We ususally see AP Maplhite only on ARAM or sometimes mid, but now it could get more usual anywher. AP scaling of his W and R is empowered. In case someone even survives his ultimate, Maplhite will finish it with ease now that his W's AP scaling is increased. Who is getting oneshoted this time? 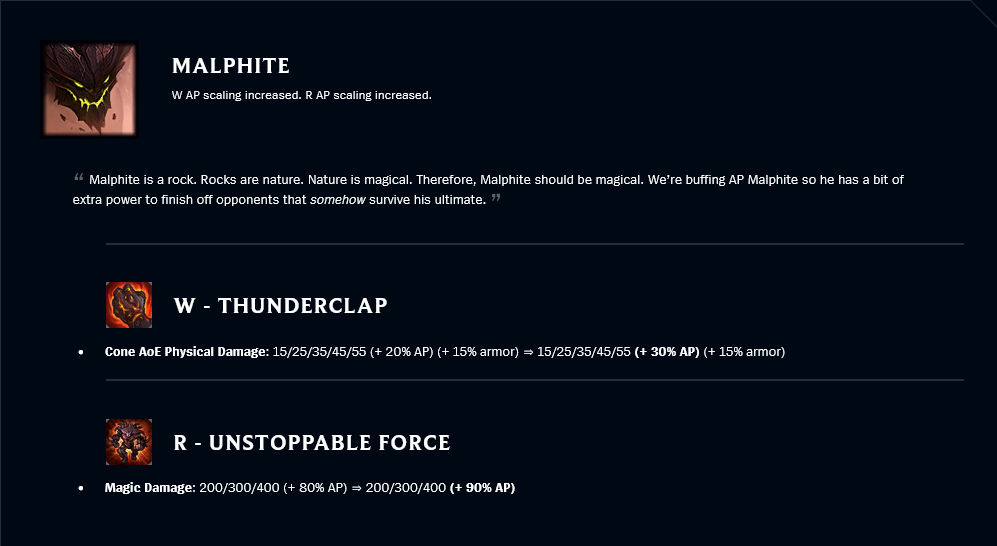 At first, it didn't seem like these changes would affect Nasus that much, but it sure did. His win rate went up 5%. The Q and R changes are huge for Nasus and provide him with more viability. The attack speed slow buff allows Nasus to win more duels especially against champions that rely hard on their auto attacks. 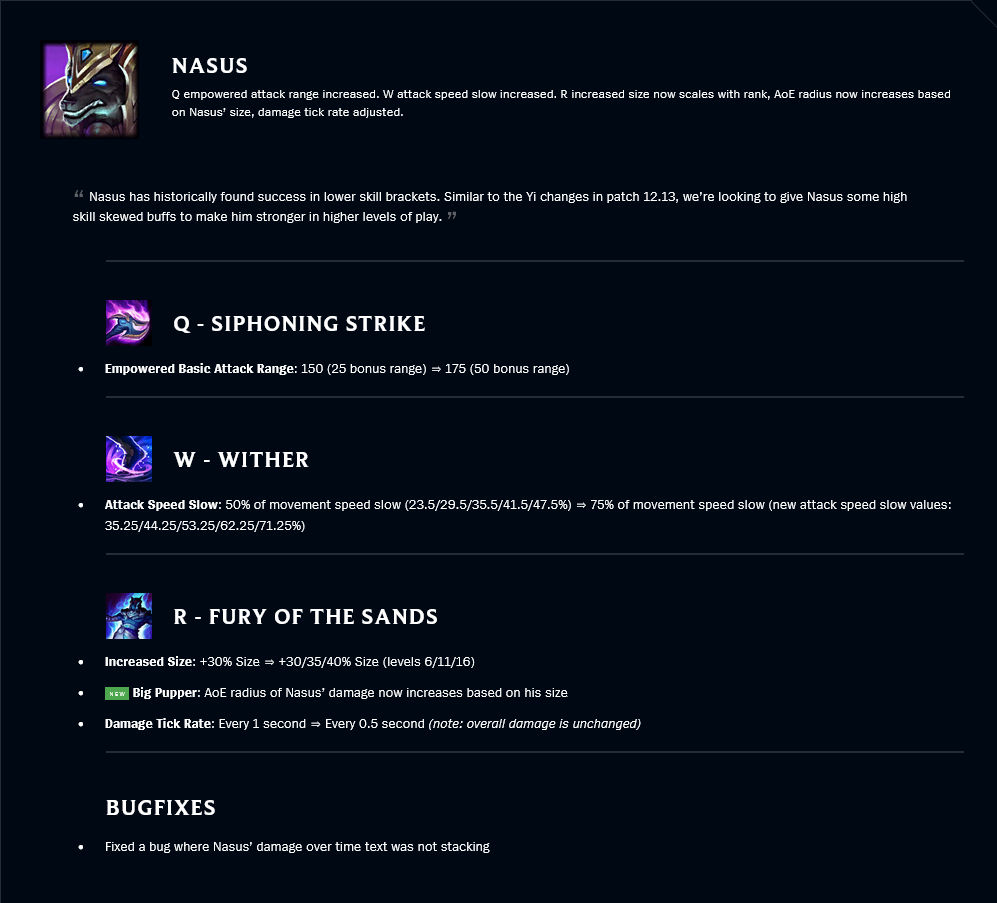 Still face checking the brushes? You should really stop doing that because buffed Nunu is waiting for you in there and once his ultimate slams, there is no way out! AP ratio scaling of Nunu's ultimate is increased from +250% AP to a massive 300% AP. As if it didn't do enough damage so far.

In terms of supports, Rakan was out of game recently. High damage supports are now a thing on bot lane so a boost to Rakan's passive shield will help him endure hard trades. His Q's AP scaling increased as well. Hopefully his appearance on bot lane will become more often. 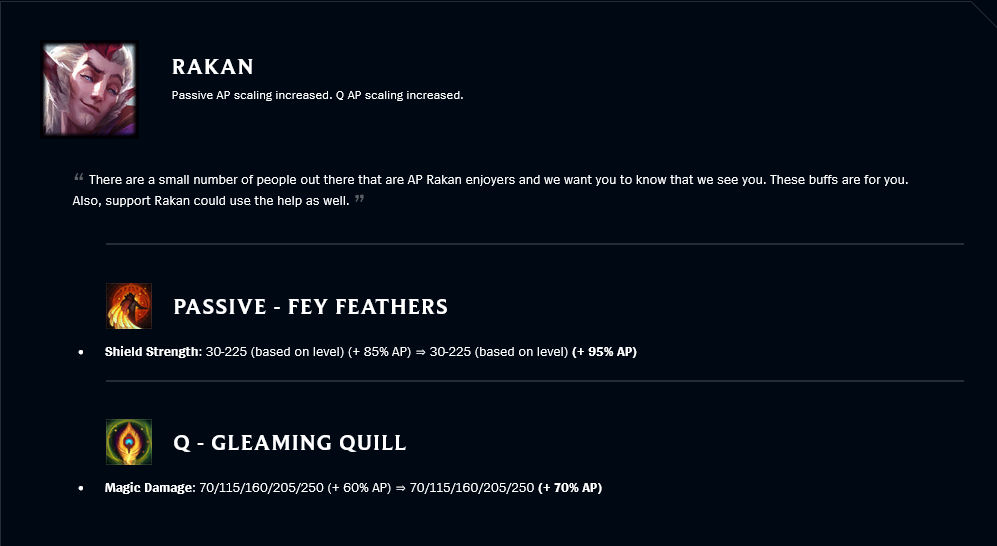 His Q and W AP ratios are increased which will help Ryze to scale much effectively into his mid to late game. We would all want to see Ryze back at the top but are these buffs for Ryze enough to compete against the current heavy top laners and strong mid carries? The buffs did improve his win rate but  Ryze still isn't even near top tier picks neither for mid lane or top. 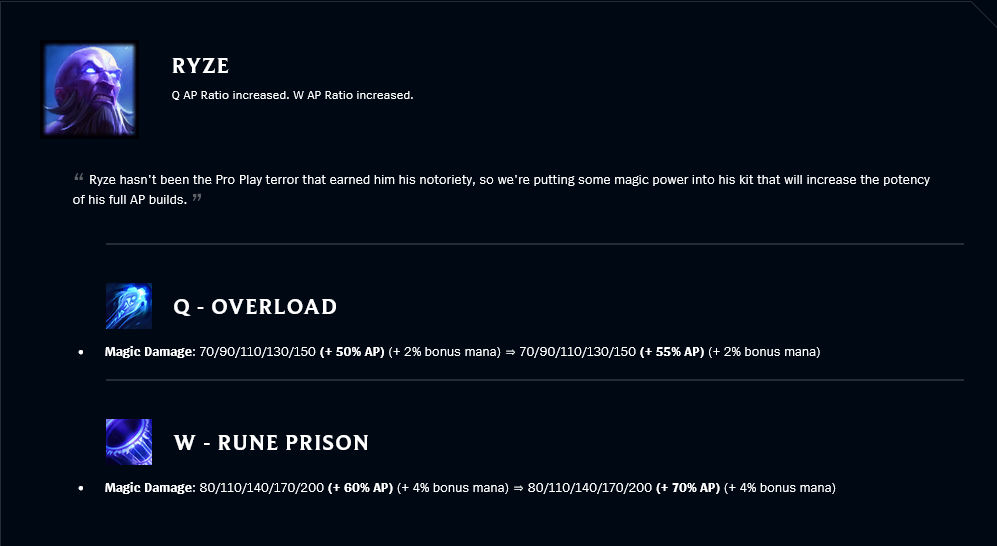 It's been a long time since we had AD Shyvana meta. She was usually build tank or full AP but with this update that might change. AD Shyvana builds will profit the most from this changes as the AD scaling of W is increased, as well as bonus on-hit damage AD scaling. Auto attacks against marked champions is slightly decreased but the damage of the spell itself is increased to compensate that. 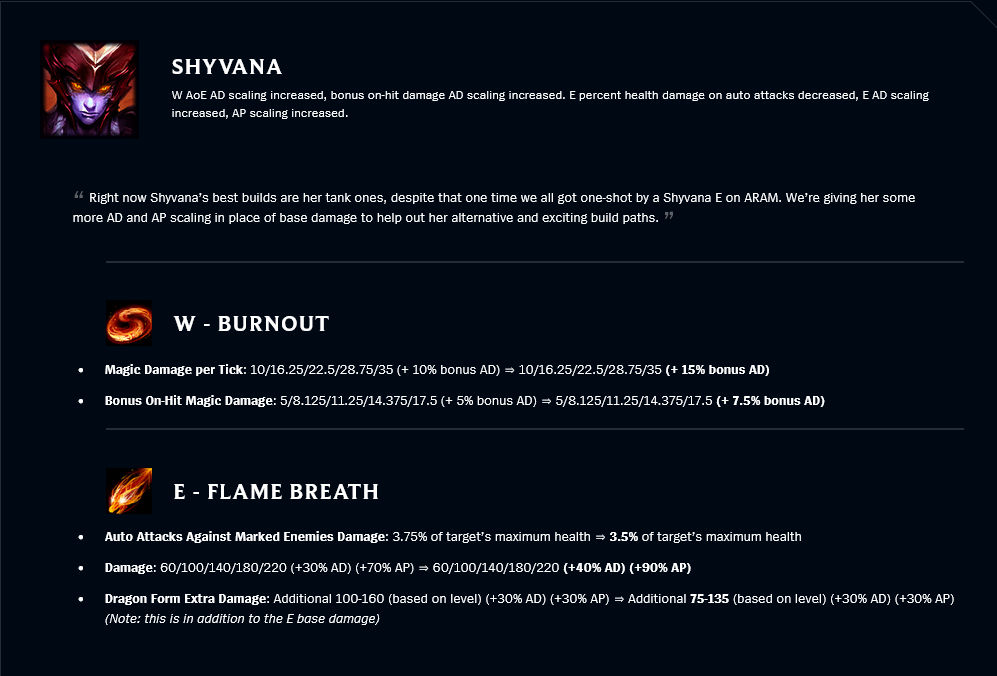 Did you find playing against Sona annoying? If yes, then you are not going to like this. Her poke ability is increased as her Q got a nice boost of damage. Power Chord Slow base stat is increased by 10%. 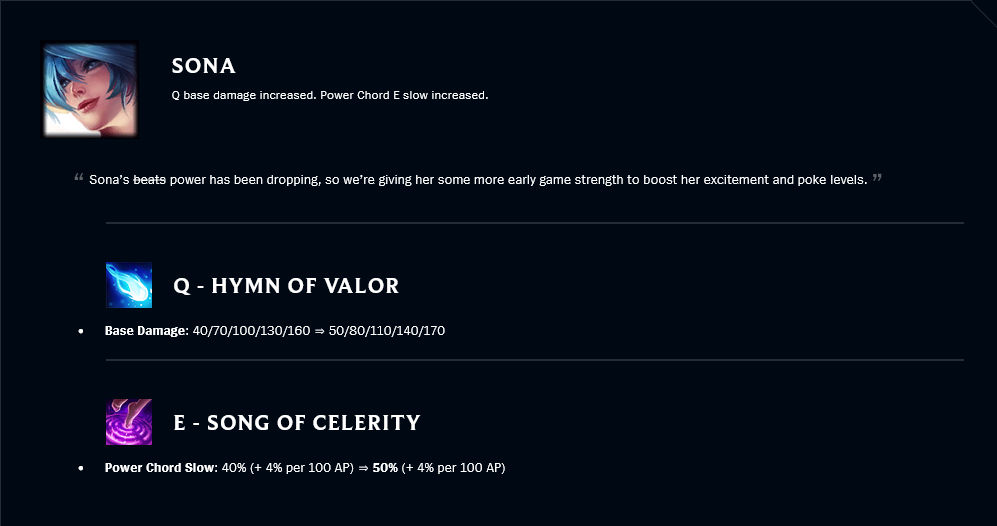 AP scaling of both his Q and W is increased which may result in his poking ability to hurt a little more now. If Tahm gets an early lead, his snowballing capability is heavily increased with these buffs since if he builds Demonic Embrace and melt anyone on his way. AP tank Tahm Kench sounds really op, let's see how it goes on the Rift. 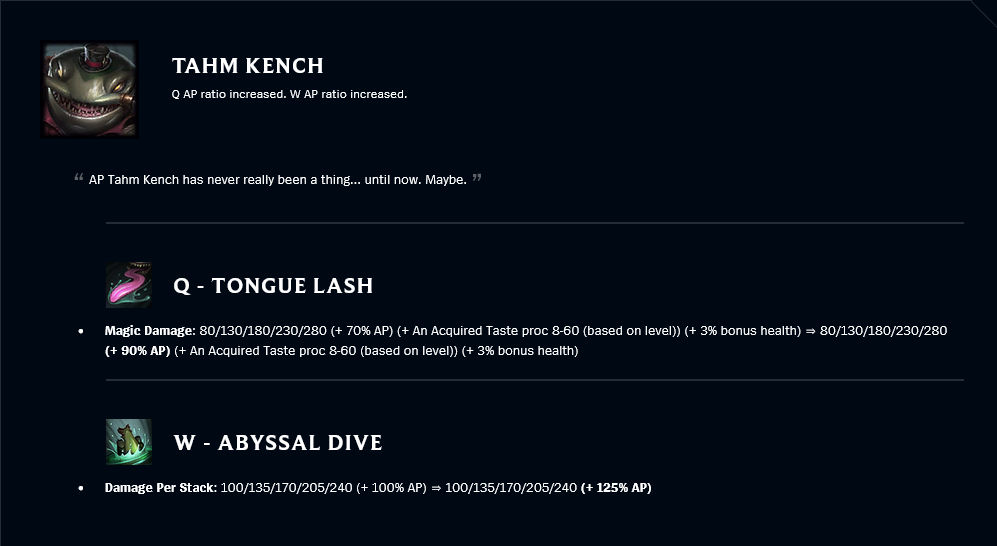 Seems like Riot really wants to bring the best of every champion regarding their ability to build magic damage. Twitch is also included in this idea so his overall AP scaling is increased. Will that bring more AP Twitch builds to the Rift or the buffs are not enough and the AD build is still the way to go? 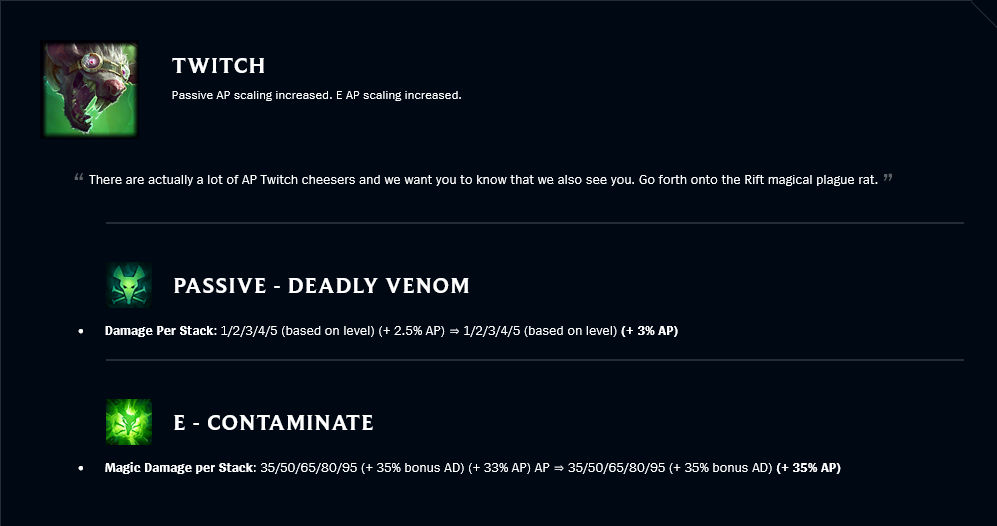 As we all know, once a champion gets a rework, we can expect some adjustments in several next patches. Udyr is not an exception and patch 12.19. will cover some tiny things by which Riot tries to balance his overall kit and gameplay. In the last patch Udyr was nerfed a little to hard, so he is getting Increased Q damage to minions and healing out of it.

Now that we went through all the champions that got buffed, let's see which champions were a bit to strong and deserved the nerf. First of only two champions that got nerfed this patch is Master Yi. His Q ad growth as well as E damage ratio is decreased. This could affect his jungle clearance speed and the ability to scale as the game goes on. His win rate was over 55% even in higher elo, and it just doesn't seem right for Yi to dominate the game by himself. 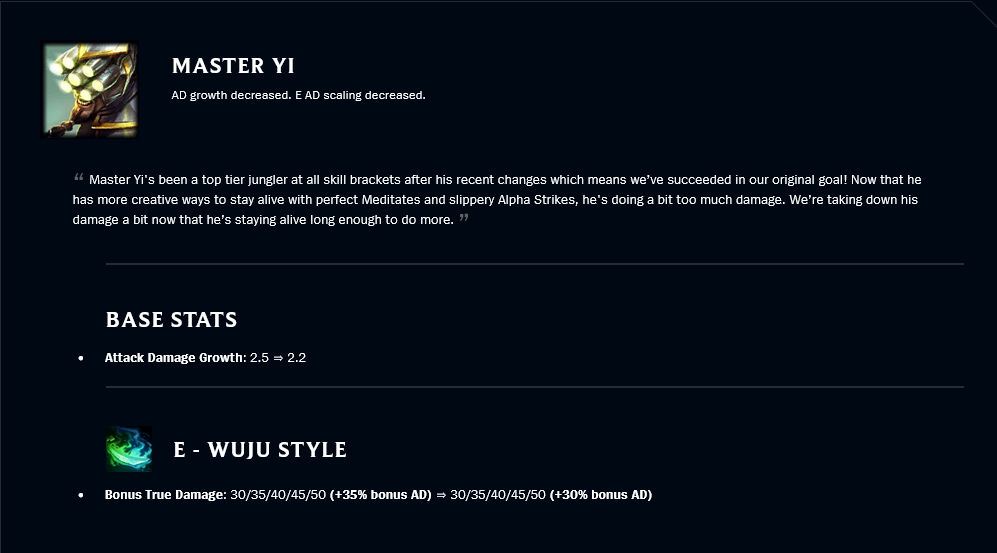 Second champion that got nerfed this patch is Rek'Sai. As the base attack damage is decreased it will also negatively impact the clear speed and trades. Regardless of to nerf, Rek'Sai is still one of top tier junglers that can carry games with ease.

Eclipse - damage is encreased, but the lethality is reduced

Since the release of the item, the popularity of it just kept growing mostly because it fits so many champions. You could have seen a lot of marksmen, and ranged lethality users build this item even if it wasn't originally designed for them. Moving to bruiser champions, the situation was even worse since the Eclipse simply outperformed other Mythic items, and it just didn't make sense not to build it. Riot decided to adjust the item, so it would fit more to the desired type of champions.

As we can see, a lot of changes in this patch but mostly buffs. The end of the season race is heating up so any buffed champion might win you a game or two if you play it wisely and use the changes smart. If you feel that you won't get your desired rank in time, do not worry. Here in GameBoost, everyone is up on date with every news and the boosters are ready to help you out in no time! Contact us if you need a professional duo player or simply someone to boost your account so you can just relax and enjoy your's end of the season rewards.

Thank you for reading and good luck on the Rift!