Greetings everyone! One of the last patches this season has been released and we are bringing you all there is to know. Let's get started.

Here you can see all the highlights of this patch. 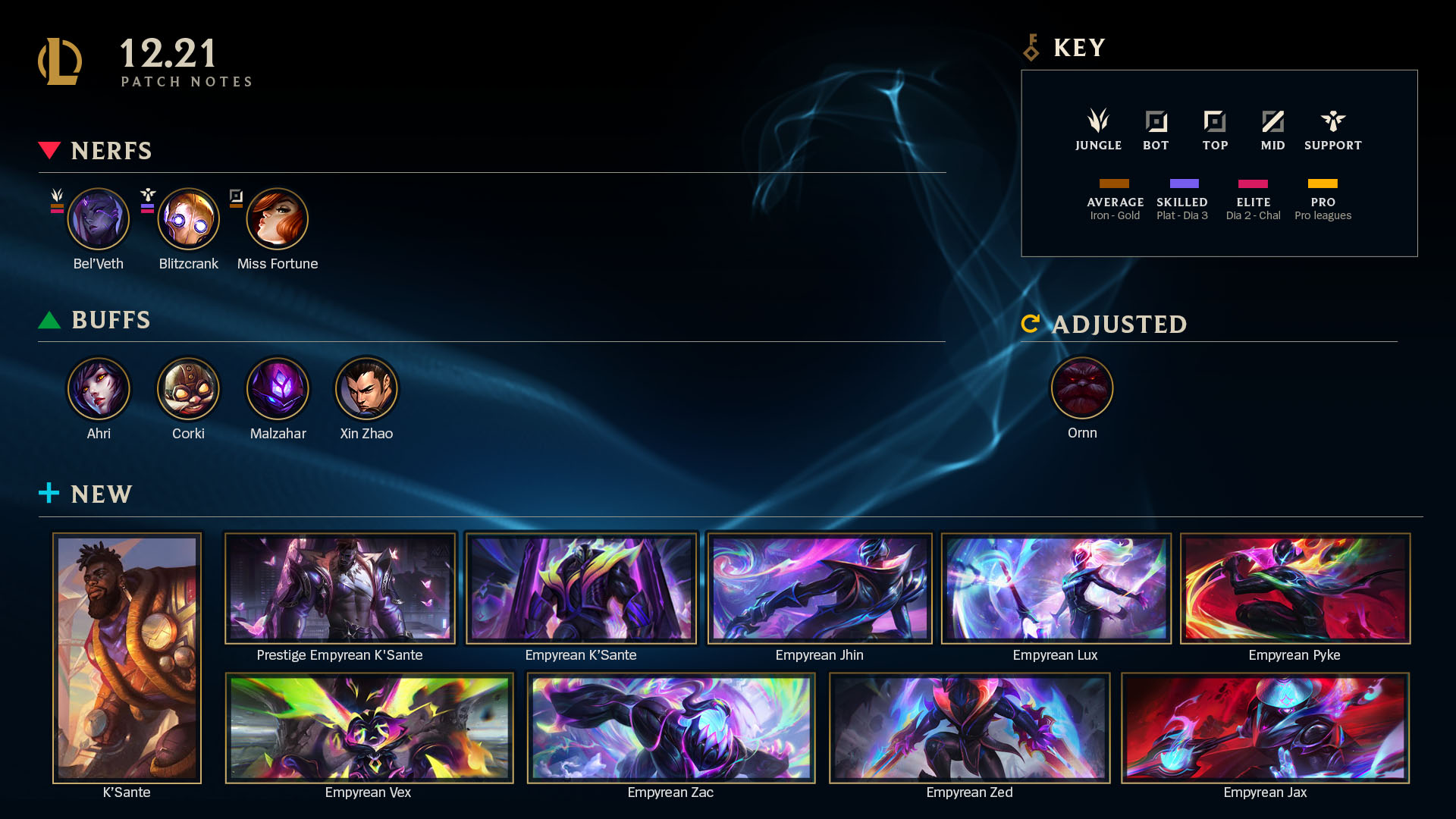 For the end of the season, Riot gave us a new champion which was released on 4th of November. His name is K'Sante and everything about his kit you will be able to read down below. Let's first see what are the changes to our current champions.

Bel'Veth is the first on our Nerf list this patch. She was so strong that many of our boosters picked her very often as well. The cooldown of her "E" has been increased to prevent it from always being held up, especially when she uses it to farm. At the same time, her "Snowball" ability when she gets a lead has been slightly reduced by lowering the percentage of maximum minion health for "Void Remor."

Good old Blitz was Riot's nerf target once again. Blitzcrank's jungle buffs made him a lot stronger, but it seems on a wrong position. When Riot buffed Blitzcrank's abilities they planned him to transfer into the jungle role but instead, most of the players used this buff to abuse him on his best position, support. In order to balance it a bit, Blitz is getting his Base Health reduced by 20 and Bonus Attack Speed of his W is reduced by 10%.

With her Q tweaks in 12.17, Miss Fortune is still in charge of the bot lane. In order to make her early game a little less dominant, Riot is reducing her Make It Rain slow. In order not to just take away, Riot decided to buff her AP ratio on both E and R. AP Miss Fortune fans will undoubtedly be delighted by that, especially in ARAM.

When Ahri's charm nerf was released in patch 12.17 patch, it weakened her a little too much. Instead of buffing back her charm to bring her back into play, this time Riot decided to increase her damage output potential by lowering the mana cost of her Q and increasing the damage of it.

Corki was simply not played often in any form except maybe ARAM. To change that, his base stats have been improved as his health growth has now been increased to 105 and his attack damage growth has now been increased to 2.8 instead of the previous 2.5. By giving Corki more durability and better synergy with the Sheen item, builds that focus more on its shorter range will automatically be strengthened with these updates.

Malzhar always struggled with farming at the beginning of the game. He relied on his Malefic Visions, but due to the slow tick rate and low damage, it's sometimes iffy to get that last hit. Malefic Visions is now for sure to kill a minion with less than 15-45 health. Riot says they will monitor this update and see if it works well. If so, they might introduce similar changes for champions that could benefit from it.

Xin Zhao is still getting a foothold in a meta where he can't do much after the laning phase, since everyone is much more mobile and durable. Riot gave him a little more strength so that he can stay on top of the opponents as the game progresses. Third Hit Bonus Damage of his Q is increased. E's cooldown is beeing lowered by 1 second. 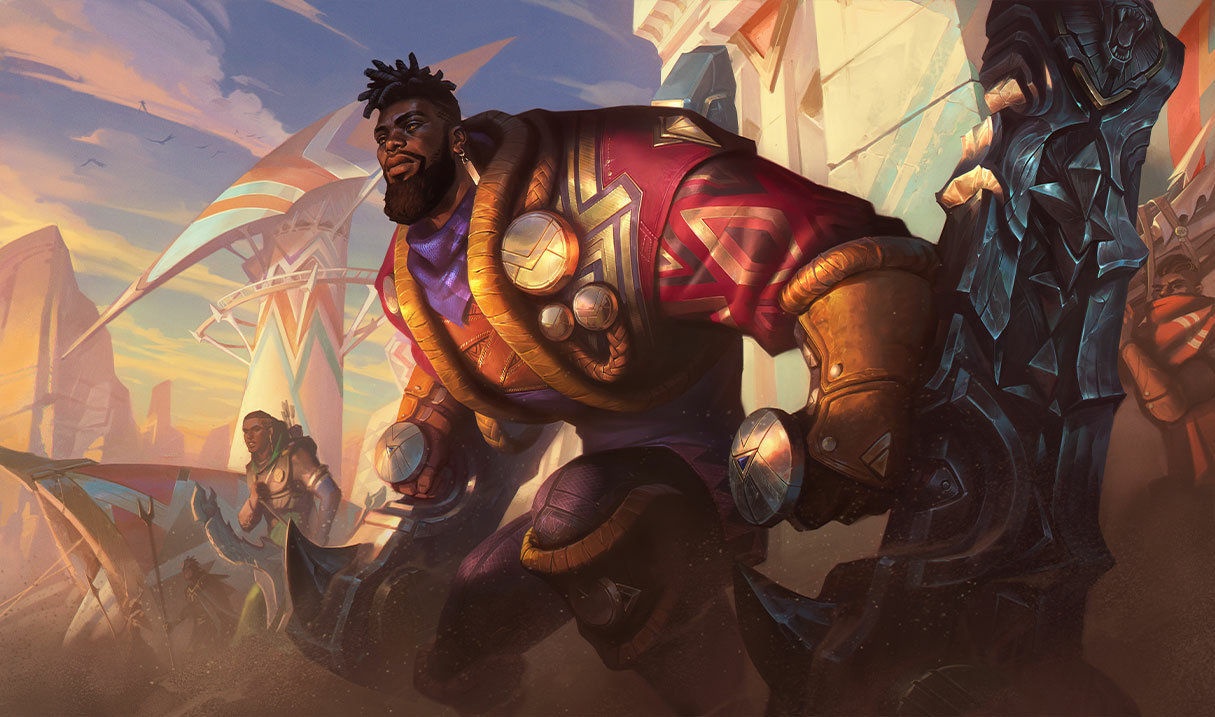 The Pride of Nazumah, K'Sante is a new tank champion who was introduced to the game on 4th of November. He is the first champion that comes from a new, unkonown region of Shurima, Nazumah. Nazumah is a city of champions, the best ones that are admired among the people. Right at the top, there's K'sante. Most tank champions that we currently have are not really high-skill oriented. This is not the case with K'Sante. You will need some serious time and effort to learn how to play him and to use all of his potential.

All Out: Attacking a marked enemy instead deals physical damage and additional max health true damage.

K’Sante slams his weapon, dealing physical damage in a small area around him and briefly Slowing targets hit.

If an enemy is hit, K’Sante gains a stack for a short duration. At 2 stacks, K’Sante instead fires a shockwave that Pulls enemies

All Out: This ability’s cooldown is reduced and no longer slows targets hit.

Release: K’Sante rams forward, dealing a percentage of max health physical damage, Knocking Back, and Stunning enemies he passes through for a short duration based on charge time.

All Out: This ability’s cooldown is refreshed, the damage reduction is increased, it deals an additional amount of physical damage based on charge time, and the charge and dash speed are doubled.

K’Sante dashes, gaining a shield for a short duration. If dashing to an ally, the distance is significantly increased and they are also Shielded. Other spells can be cast during this ability.

All Out: This ability’s dash speed is increased. Dashing to a targeted location has increased range and can go over walls.

K’Sante shatters his ntofos, dealing physical damage and Knocking Back an enemy champion. Enemies that hit a wall will take a greater amount of physical damage, are Knocked Back over the wall, and are briefly Stunned. K’Sante then dashes after the enemy and goes All Out for an extended duration.

Since the 12th season is coming to an end and a new preseason is around the corner, Riot is focused on preparation for all the changes that will soon be live. In this patch they tried to balance some champions with some minor changes. New champion release is always exciting, and it did not disappoint this time either. On top of that, new series of nice Empyrean skins is here as well. I hope you enjoyed the breakdown of this patch. We will be back soon with more news!